COMMERCIAL FISHERMEN FROM ACROSS THE COUNTRY SHARE CONCERNS, STRATEGIES 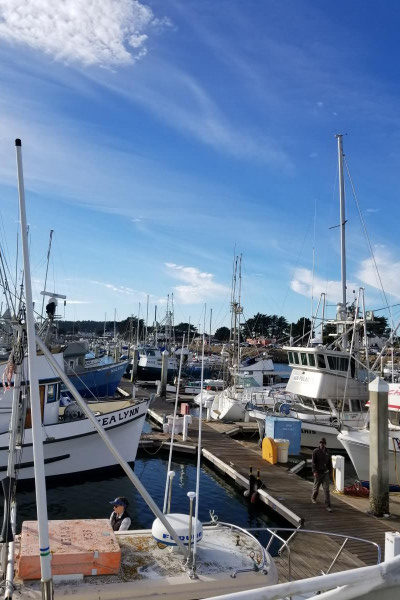 Commercial fishermen from all over the country, including Cape Cod, visited Half Moon Bay, California for a meeting of the Seafood Harvesters of America. Staff photo by Marjorie DeBrosky .

Commercial fishermen have lamented the lack of cod, an iconic fish challenged by everything from climate change to seals. Lately there is another concern: hobbyists.

“Look at our cod fish, the recreational fishery was close to 300 percent over quota and there was no accountability,” says Tim Linnell, a long-time captain.

The problem is not particular to the Cape.

“There is a feeling that commercial fishermen have been walked over by the recreational guys,” says Linnell, emphasizing that he isn’t referring to local charter boat captains. “We have been really demonized by the rec. We need a spokesperson.”

Seafood Harvesters of America, which represents more than 15 industry groups, is willing to take on that mantle. Members met in Half Moon Bay, California, last month to plan a strategy for a number of important issues where decisions are being made at the federal level. Linnell, captain of F/V Perry’s Pride II, and Marjorie DeBrosky, sector manager for the Georges Bank Cod Fixed Gear Sector that works with Cape Cod fishermen, were there to represent the Fishermen’s Alliance and share ideas.

Issues include protecting scientific safeguards in the Magnuson Stevens Act, making sure commercial fishermen aren’t shut out of traditional fishing grounds by wind farms and offshore aquaculture, getting in front of climate change, and fostering electronic monitoring for better accountability.

“Accountability is really the core principal of Harvesters,” says Leigh Habegger, executive director of the group. “If we don’t have accountability we don’t have good data, management goes out the window and the whole system begins to fail.”

The sports fishing lobby spends a lot of time and money advocating for themselves and in recent years commercial fishermen have realized they need to do the same.

Chris Brown, a Rhode Island fisherman and president of Seafood Harvesters, visits legislators regularly to speak for commercial fishermen; he was even invited to President Trump’s State of the Union address.

“In the course of your career on the Hill here, you are going to have (recreational) people come into your office,” Brown recently told a group of Congressional staff during a visit to Washington, DC. “Some of them will have just a little bit of their hair on fire, the rest of ’em may have the whole thing going up. And they will ask you repeatedly, and they will make sound logic to you: ‘Give me just a few more fish, I just need a few more, and we’ll take them from the commercial side.’ Well, that dog isn’t gonna hunt. That isn’t acceptable.”

Linnell says there are also concerns about large-scale ocean farming. The federal government is on track to spend hundreds of millions to study huge fish farms. Not being able to help steer that conversation could be devastating to fishermen.

“These are not like oyster grants. These are giant farms where you kick commercial fishermen out,” Linnell says. “We need the bottom. We need to work.”

An example of the Seafood Harvesters’ success can be seen in the Magnuson Stevens Act. Despite an intensive lobbying effort from sports fishermen, it hasn’t been weakened – at least so far. Fishermen, which also included members of the 1000-member strong Fishing Communities Coalition, descended on Capitol Hill to make sure legislators understood why the watershed act had to be protected.

“Magnuson is rich in accountability. I’m president of an organization that was founded with accountability as our north star,” Brown has said. “For commercial fishermen, we’re all in. For someone who does it on their weekends recreationally, maybe the stakes are still high … but it’s not the same sort of survival thing.

“I’m 60 years old, high school educated and very successful, but chances are that if things don’t go good fishing, it’s not going to end up good for old Chris. So, you can always find something else to do on the weekend, but a lot of guys like me are wedded to the ocean by the Magnuson Act, much like a farmer is wedded to his fields. I have to take care of it.”

Although commercial fishermen haven’t always been onboard with aspects of fisheries management, there is an increasing focus on how business plans depend on healthy stocks, which in turn depend on good science, which in turn depends on improved accountability. Seafood Harvesters has been a big proponent of having cameras on boats to track what is being caught and what is being discarded. The hope is that solid information can be used for every trip, and to avoid human observers who can get in the way and create safety issues on small fishing vessels.

She says the California experience was a good one because the meeting brought together a variety of fishermen and businessmen related to the industry.

The annual meeting was also an opportunity to see fishermen from different parts of the country and reinforce the message that the U.S. fishing industry is getting stronger under sustainable fishing and management practices.

Linnell says the industry hasn’t done a good job of showing how valuable it is to the economy, which can put it at a disadvantage in policy discussions.

“We don’t have accurate numbers of how important commercial fishing is. Our numbers are really off,” Linnell said.

Linnell also was happy to connect with Steve Fitz, originally from Chatham, and learn more about the fisheries in California.

“There are probably 25 types of cod fish you can catch out there. One is Rock Cod, which tastes a lot like dogfish,” Linnell says.

Fitz, who started his fishing career on the Cape, said some of those cod species are off limits to commercial fishermen, but fair game for the recreational contingent.

The recreational sector also gets an “early whack” at the Dungeness crab season, said Fitz, with a smaller size limit than those who fish professionally. Even so, a 10-crab-a-day limit adds up when there are thousands of recreational folks on the water.

“They take a lot of crab,” Fitz said simply.

Linnell is hopeful the Seafood Harvesters will be able to become an increasingly powerful national voice for commercial fishermen.

“If you can just unify you will probably get something done in Congress,” he said. “We are all in the same boat at the end of the day.”

“We are not entitled in any way,” says Chris Brown, offering the guiding philosophy he shares with public officials, and the public at large. “We are entrusted with a resource that you own. I am entrusted with its utility, I am entrusted to defend it and that is why I am here. So, I guess you’ll be seeing us (in Congressional offices). We’ll be in, because there will be assaults on everything that keeps our fishing heritage healthy.

“Our fishing heritage is 242 years old. We were the first people on this blue economy thing; we’ve been doing it a long time … The history of our nation’s growth would certainly be different if we did not have fishermen and did not have fish. So we’re going to fight. You’ll see us, and we will never turn our backs on the American people.”